War of the Ring by Games Workshop 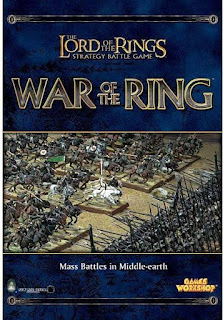 War of the Ring, in my humble opinion, one of the best games that Games Workshop ever produced. Sure... it had its faults, but for those that look past the system which was possibly never intended for competitive play, its then that the game really shines... as a large scale big battle system for narrative battles... like the battles we see from the Lord of the Rings trilogy movies.

I've been fortunate enough to acquire a significant collection of LotR armies, years of trades and some wheeling and dealing to get to the amount of models I have... so if you want to play this cool game, what I would suggest is this;
Pick up old BGIME collections that noone wants anymore from the trade pages on ebay etc... The basic armies... Minas Tirith, Rohan, Mordor, Isengard, Moria and build one or two of those into a War of the Ring force.

The actual movement trays by GW are also out of production.. so good luck trying to source any of those. Flag that idea and go ask a laser cutter to make you some up. You can get a whole heap for fairly cheap.

As for painting, you dont have to go hard out on all your models, just focus at doing the heroes, banners and special models well and your basic troops can get away with a basic paint job... washes are your friend here. I had a bit of help painting mine too... so thanks Richard and Dave if you ever see this :)

The main rules of the game have some oddities, some of the core rules needed just a little tweak... but the special rules and power combos from the heroes and the army building needed a massive reworking if the game was ever to continue supported. GW dropped the game after putting out the battlehosts supplement, im guessing it didnt have the pick up or sales they were hoping for. Overall the game was great and Ive had a lot of fun with it over the years. My friend Jamie (RoughWar) made some houserules that weve used, so thanks to him for the rules sheet below!

You can also see a starting out/how to play video by Ash Barker at Guerilla Miniature Wargames here;
https://youtu.be/-wQUIuFlasU

To put that into a short version. Noah my oldest son of ten and I are currently quarantined at home for a month. Government orders... covid19 has hit the world. Weve been doing a Gondor vs Mordor campaign and Noah just loves to write lists, get models out and tinker around dreaming up scenarios and battles.
He takes after his Dad somewhat! So I thought I would share what we have been up to.

The story so far is thus; 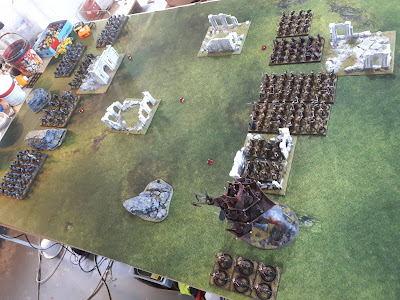 We had a largish WotR battle in Northern Ithilien, troops moving south to amass for an assault on Osgiliath. The Easterling hordes won but it was a close battle. 1200points each. 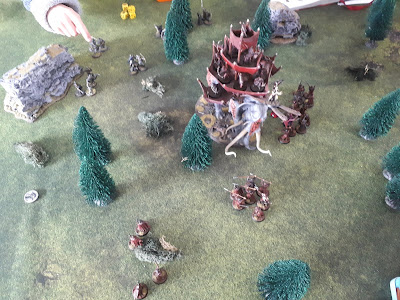 Faramir ambushed the forces of Harad also in a game of Middle Earth Strategy Battle Game (MESBG) but half his forces were trampled by stampeding Mumakil so again Evil pressed on to assaulting Osgiliath. MESBG 500points each. 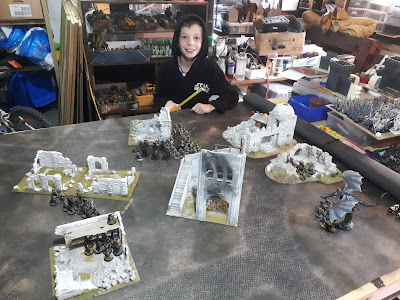 The Osgiliath battle was another game of MESBG. Mordor defeating Gondor by capturing key parts of the city and repairing the bridge. Nazgul on fellbeasts causing havoc for the defenders. MESBG 800points each. 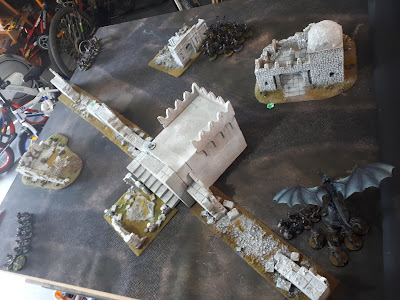 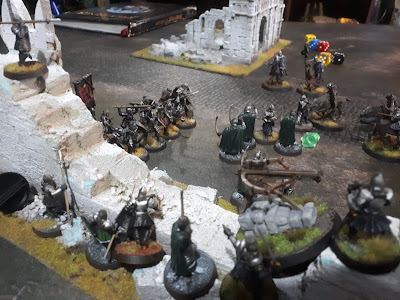 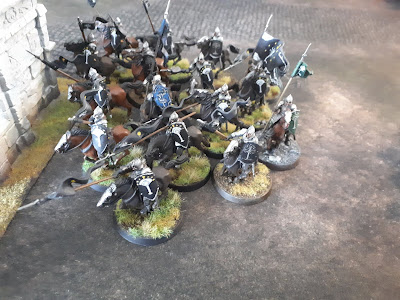 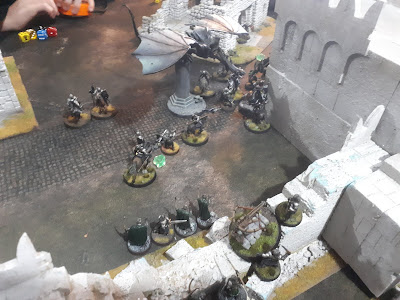 Then Faramir and his company had to retreat and Mordor caught up to him as he retreated through the Rammas Echor. They again failed to stem the tide of Saurons assault, the Nazgul was unable to wound Faramir. 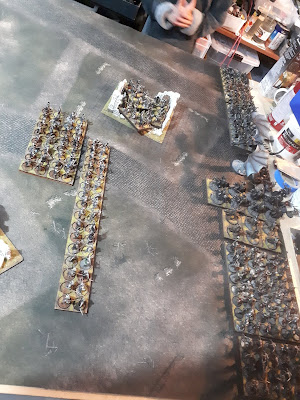 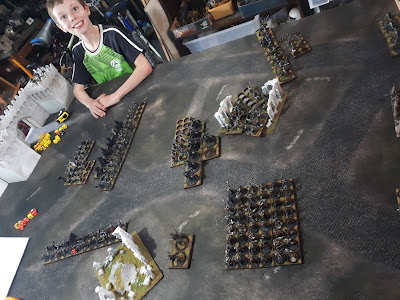 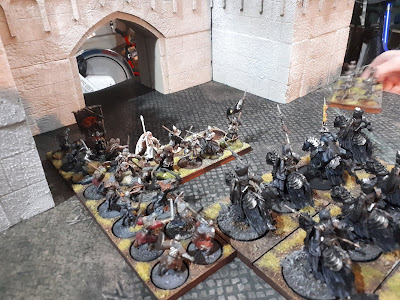 The Retreat on the Pelennor was the next battle we played, it was WotR and the objective was to get Faramir the heck outta there. As per the booklore, Faramir was wounded as we played the final turn meaning we would next play the Battle of Minas Tirith.

As yet we havent played the Pelennor fields, weve just been sorting models and setting up formations. Its going to be a big event! 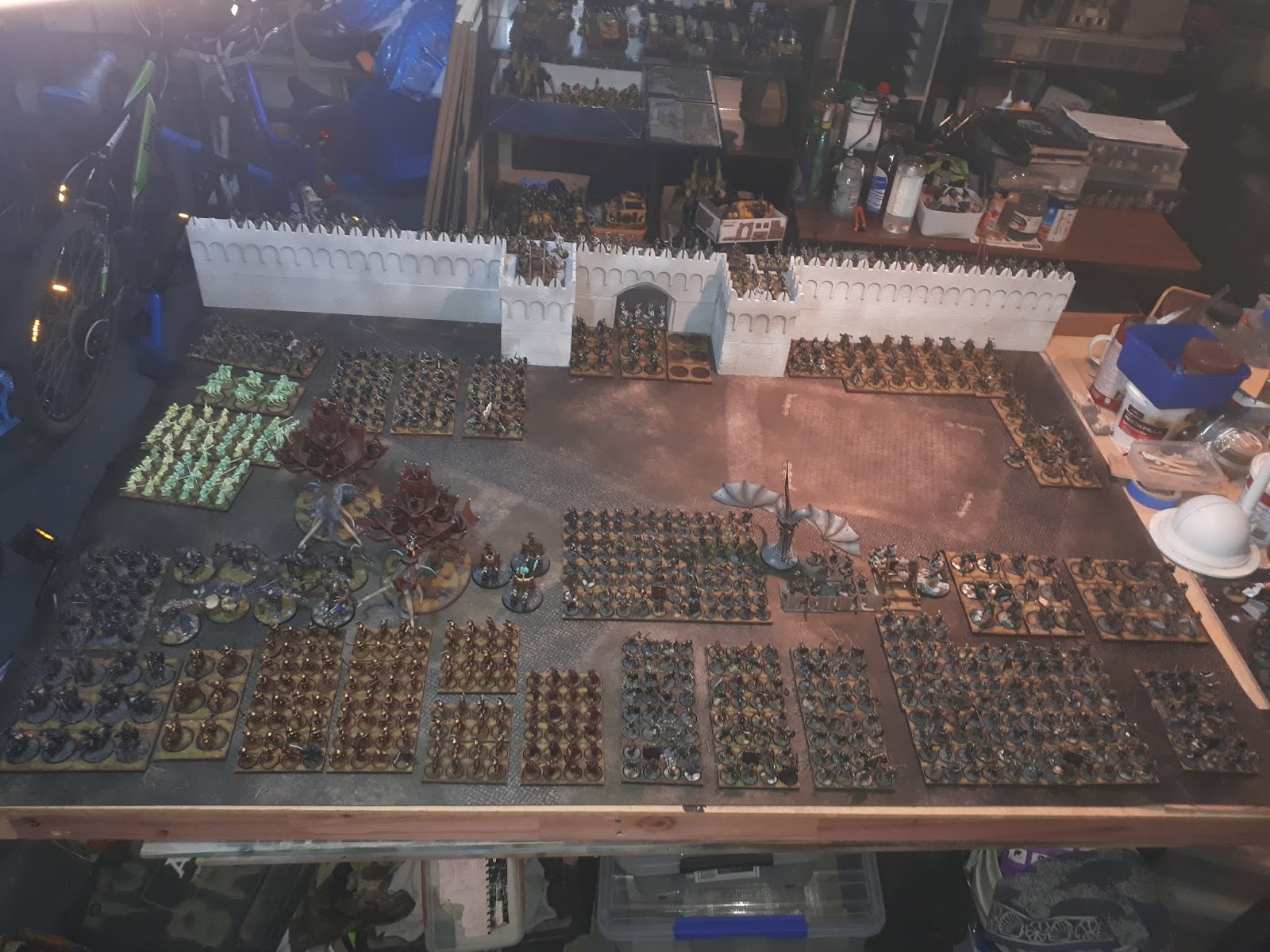 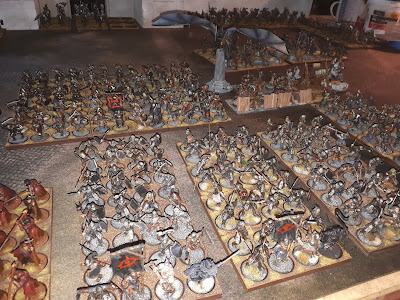 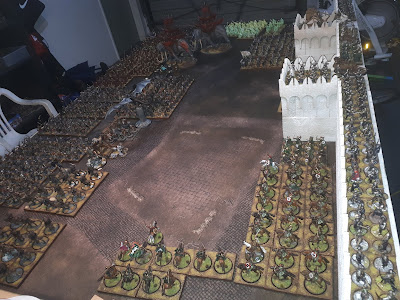 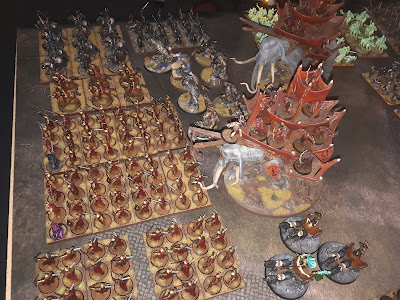 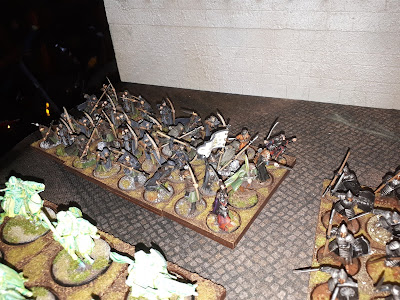 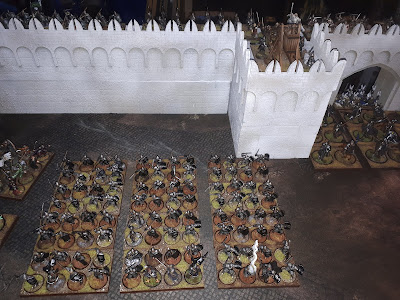 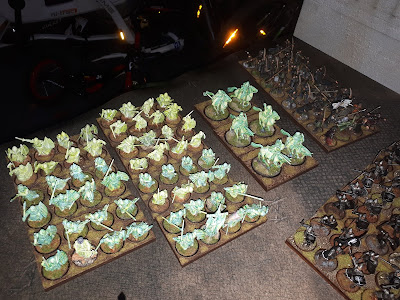 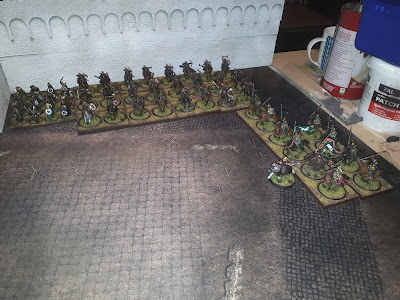 Iv got the Dol Amroth knights on the paint table, il do a bit more and hopefully  we can crack on with the game.

Heres a couple of shots of our Big Pelennor event we had a couple of years ago
Cheers and il catch you lot next time! 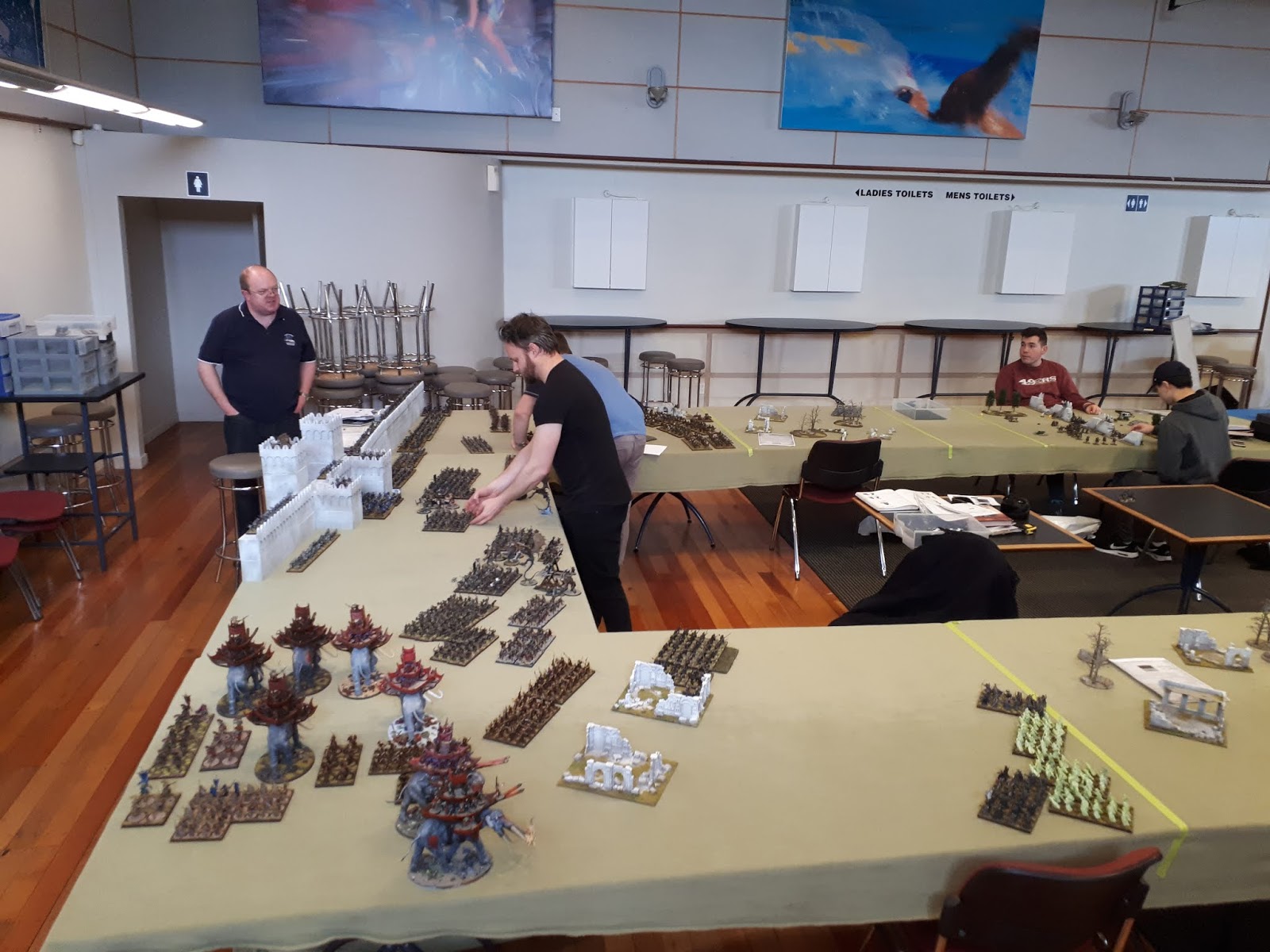 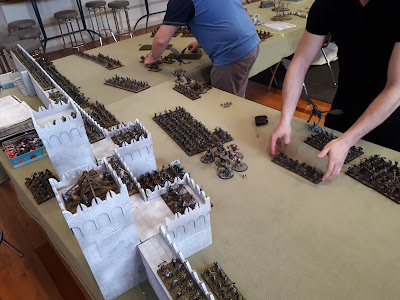 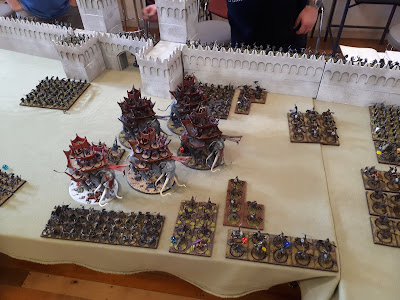 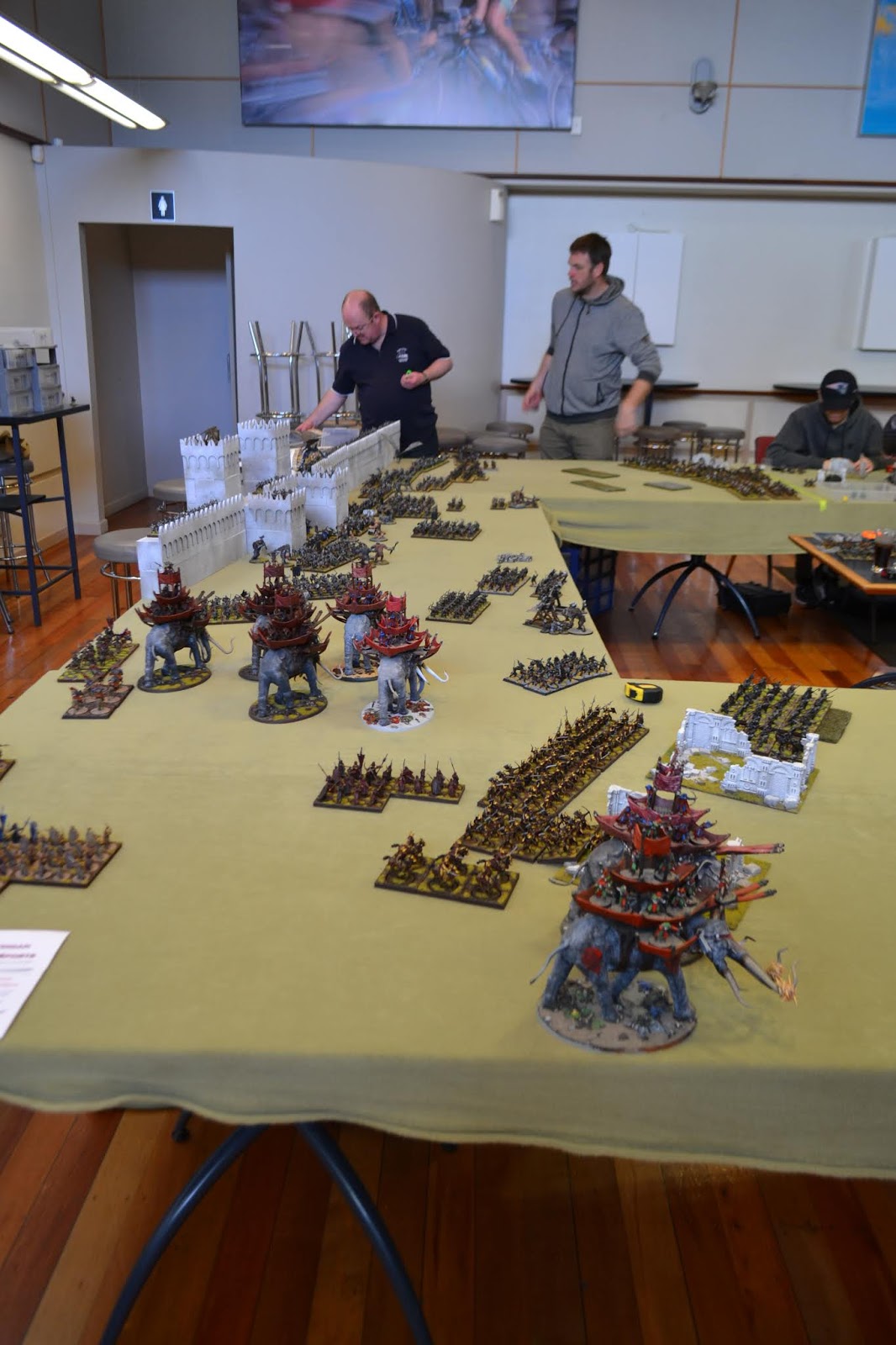 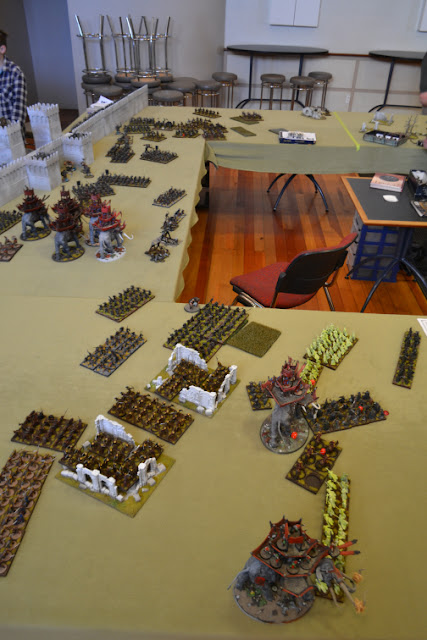 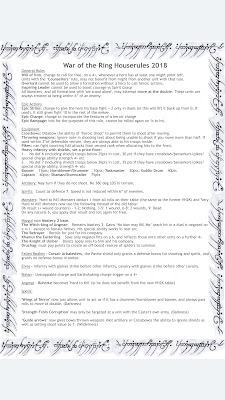