Battles in the Wilderland, MESBG, Lord of the Rings, Mirkwood

Battles in the Wilderland

We look at the Background Lore, the forces and finally the Battle Report;

In the Eastern Vales of the Anduin and the Western Eaves of the Great Greenwood, Rhosgobel, the Woodland Town (commonly called Bruhton) and several smaller settlements sit as the last bastion of defence against the growing powers of Darkness in the Region. Dol Gûldûr grows in strength and often now sends out parties of orcs to raid and pillage, spiders lurk in the darkness of the forest and other foul creatures are more regularily seen in the wood.

Woodsmen clan War-leaders and Elders join for counsel with prominent Elves like the exiled Tauriel and a strange old wizard called Radagast to talk about how to combine strengths and push back the darkness and preserve their way of life within the forest. Most prominent of the War leaders was Elder of Bruhton, Jarl Vitten but he was recently killed in an Orc ambush and raid (see battle report) and Elder Ingomer Axebreaker of Woodland Hall has stood up to take his place as new war leader of the Woodsmen Peoples.

In Dol Guldur, several Orc Captains and Black Numenoreans have become chief amongst them to seek the top spot as servants of Sauron answering only to the Nazgûl... within the old fortress, many pits and dungeons lie, forges of malicious and crude weaponry, breeding pits and garrison halls for the creation of mighty armies. Warboss of the hunter Orcs, Drûhkûz gathers scouting orcs, spiders and fell wargs to send out raiding parties to capture fresh meat for the growing forces within the shadow (We follow his story).

The Forces of Battle 400points each;
(Using the Battles in Wilderland pdf army lists)

In the first game Noah and I played the MESBG scenario Fog of War, this scenario usually a bit of a guessing game but at 400 points and only 2 heroes each we knew we had to protect and destroy our non-leader heroes then move forward to capture a secretly noted terrain feature.

The Orcs and Woodsmen pushed forwards to towards each other but slightly offset with spiders hiding on a hill on another flank, the Woodsmen split their army to deal with threats from both angles. The games death blow came when (on turn3 good priority)Drûhkûz charged an enemy warrior 9" away and had his bats fly overhead and hit the same target... calling a heroic combat, Noah watched in horror as the enemy leader flew around the back of his lines with bat swarm into his Clan Elder Ingo utterly destroying him, losing priority the bats and Hunter Capt retreated to the safety of the lines and proceeded to wipe out the poor Woodsmen. On the other flank, Jarl Vitten and his warriors were struck down by the vicious spiders.
The game ended with a major victory to Dol Guldur having secured the terrain, killing the enemy hero and protecting my own.

The next game we played a made up fighting retreat where Noah had to start in the middle with his remaining forces and retreat back to the safety of a nearby palisaded settlement, i started with my remaining forces 6" from the opposite side and had to chase him down, it looked pretty good for Noah he killed both wargs so the captains went on foot, but i had two spiders and they proved their worth and we caught up and annihilated the remaining retreaters in front of the gates! 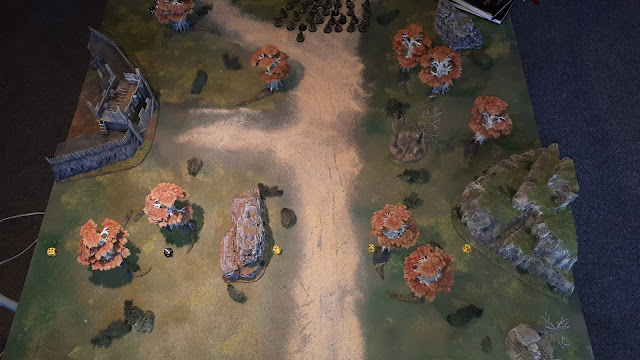 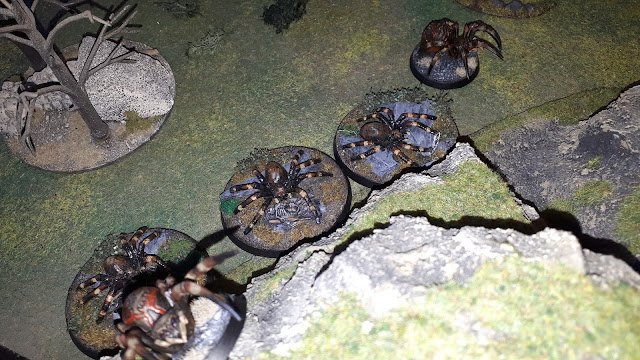 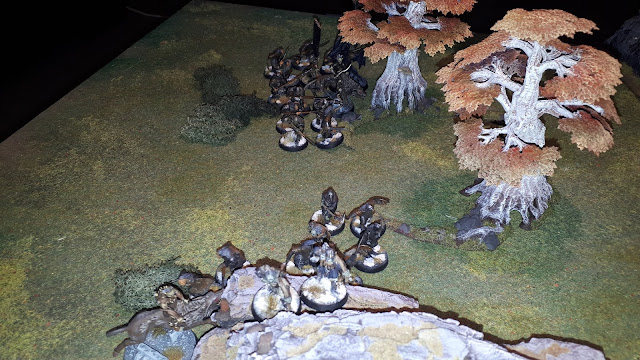 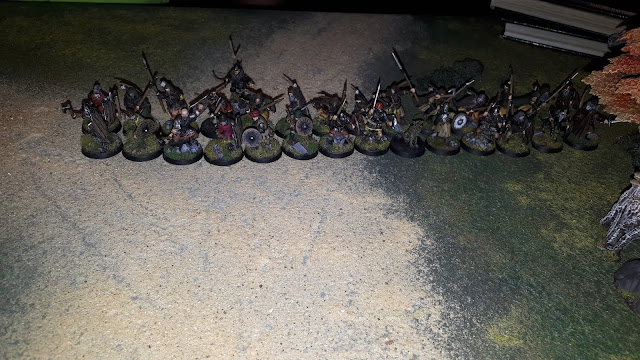 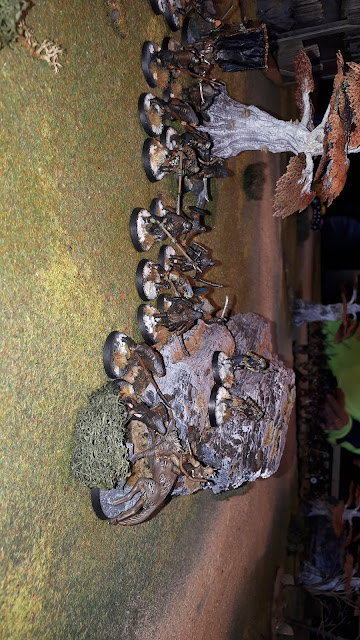 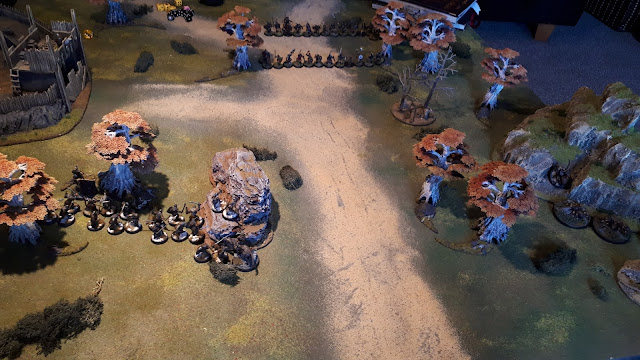 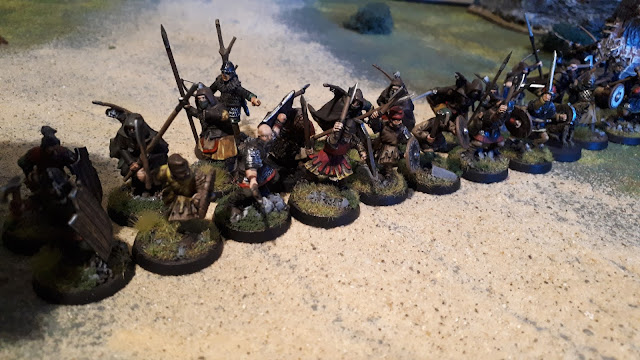 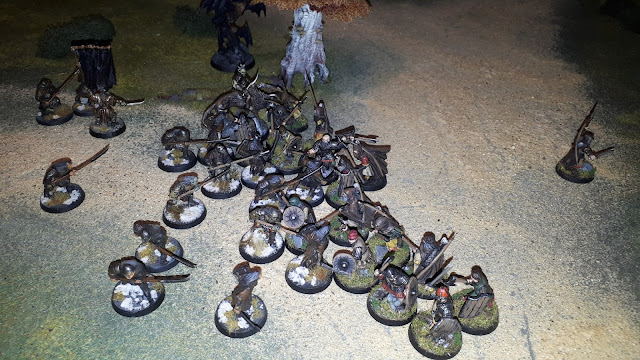 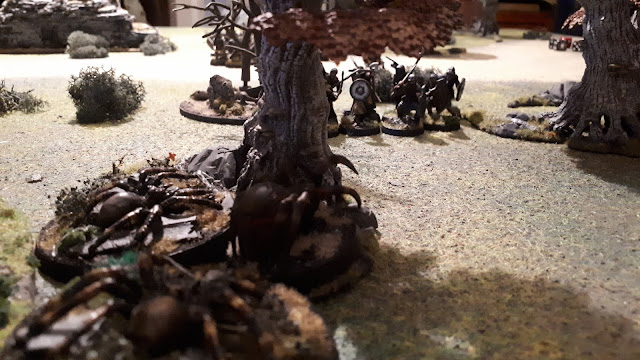 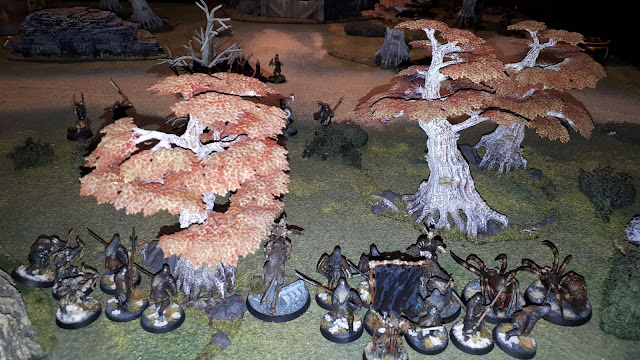