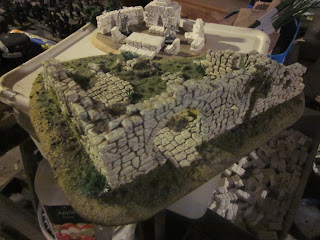 I decided a while back that I needed some new LOTR terrain and I stumbled on Hirst Arts by googling stuff. At first I thought that making the monsterous ruined watchtower thing was the way to go but settled instead on this instead after getting sick of plaster pouring.
The theme is Woodlands stone ruins somewhere in Mirkwood. I had trouble adding the trees to the piece above so when I do that, it'll be finished.
I have Elves and DolGuldur themed armies so this should hopefully look great with them... especially the Elves.
Below are some in-progress shots of my next pieces which will look similar in style to the one above 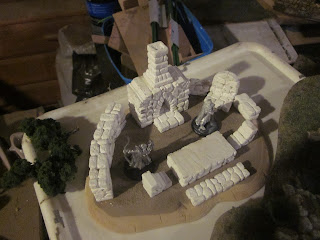 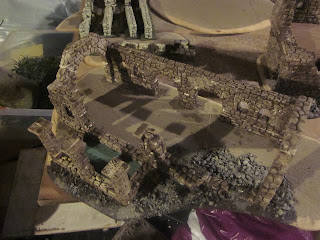 This is the ruined stables, the piece with the columns will be a watering pool... still contemplating on whether I should add a second story over that bit. 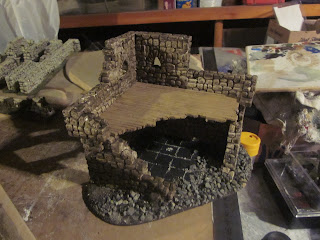 Two story ruins
The floor is just 3mm MDF board which I took to with one of those cool new multi-tools (like a Renovator) and washed it brown... simple yet effective. 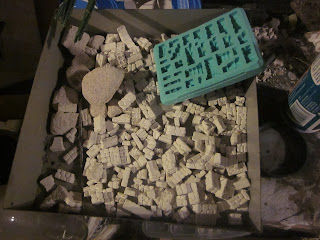 One of my 3 molds, I think I got 70 and 75 and the basic building blocks molds, after doing about 13 runs of each I still have heaps of leftover blocks... which can only mean one thing... I HAVE to make more terrain! 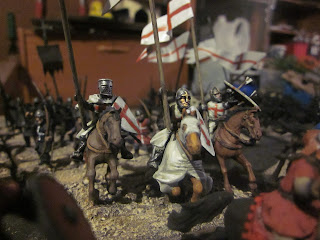 My Crusader Army is started but progress has become a bit slow. This unit of Templar Knights is painted though. Its been such a fun army to build, I love the kitbashing side of it. The flags are not paper... I make mine from the blister boxes clear plastic, cut to shape, heat with a lighter and bend them up how you want, superglue, paint, done! they are really durable as they have some flex and you can get some really good kinks that are hard to get with paper ones.
Based on 8cm Frontage Impetus bases 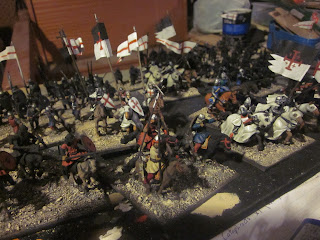 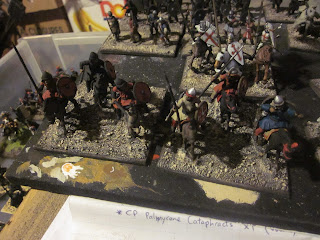 These were fun to make, I didn't even know what Turcopoles were till I saw them in the list and googled it. I have hardout kitbashed them and I think they came out really well, need to finish painting them though. I did a unit of Syrian archers too but I didn't get a pic sorry, perhaps when I finish them! 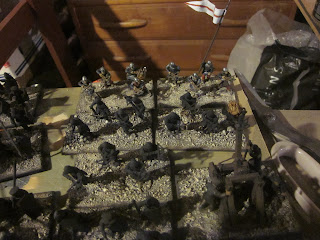 more stuff, my Onager Jas (Kruger) gave me with the crossbow units 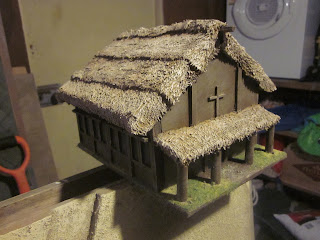 And I have finished at least one thing!!!! my SAGA feasting hall. The thatched roof comes off, its fairly big, I just need say 3 thatched huts to go around it.
I have a few 40KOrks in the post, couldn't resist- $20NZD! I've never been into 40K at all BUT when I was young I really liked looking at White Dwarf GorkaMorka pics, I thought it was the coolest thing ever! so 20 years on, I thought I'd give it a crack or a bash or Waaaaghtever.
So that's me... sooo much to do, so little time ;)