Skirmish Sangin was the new game we tried out this week... I already had a heap of eastern European insurgents but to stick with the "theme" I repainted a few just for the game.
I've gone with an Afghanistan Army uniform style rather than the usual "Taliban" gears as I don't have the figures. Pooch does and they look great, perhaps he will post them sometime soon ;)
I was going to post the game and terrain but I cant get my phone to transfer the files to the laptop. 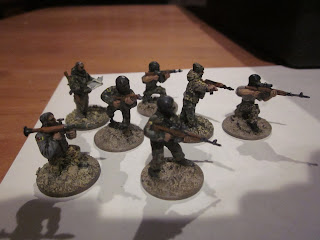 Two shots of the new gang, the camo was super fun to paint. 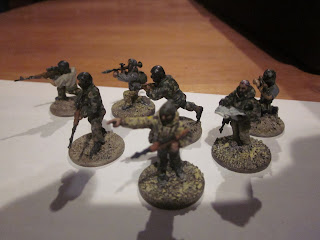 I have about thirty of these guys for Force on Force
Adam has posted the game now so check his blog if you like this sort of thing
Kruger has SAS and probably some pics on his blog, its the same old story... I trade him some figures and he beautifully bases and paints them to my shame!
I enjoyed the game Pooch, its percentages but not rocket science and I liked the system overall.